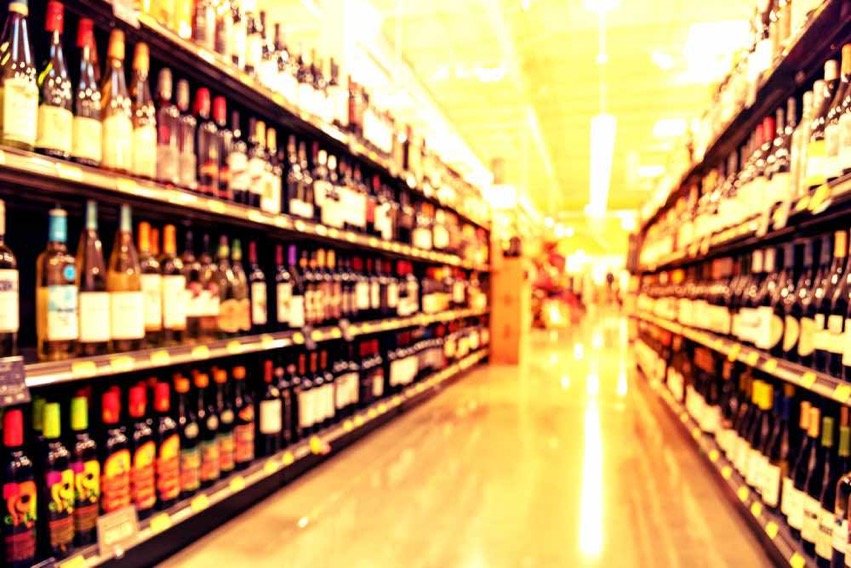 Britain’s biggest alcohol brands are back in focus as the Grocer publishes its annual report into the state of the UK alcohol market. Innovation continues with craft brewers and spirits producers continuing to innovate and grow. The data looks good for these new brands. Take gin. Thanks to the craft gin explosion, sales are expected to overtake those of Scotch. The supermarkets are muscling in on craft beer too, often at the expense of bigger name brands.

So how’s this shaping out at the top? Have big brands lost share to their smaller competitors? This post looks at the fortunes of the UK’s leading alcohol brands.

The overall picture for the top 100 brands is positive with almost two-thirds showing growth over the last 12 months. The top 100 grew by 2.3% to reach just over £9 billion in value. The overall growth rate seems low and expected if rising prices have filtered through to the retailers. However, the top 10 shows a more mixed picture: 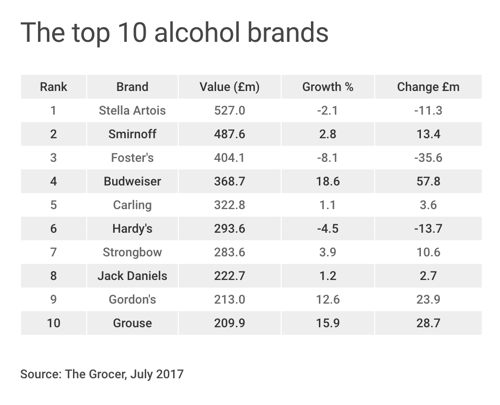 Stella Artois retains its crown despite a model 2.1% fall in value. Seven of the top 10 grew over the last 12 months. Second-placed Smirnoff grew slightly. Bud, Grouse and Gordon’s were the fastest growing brands in the top 10. Overall 32 of the top 100 grew value by more than 10%, The table below shows the best performing brands: 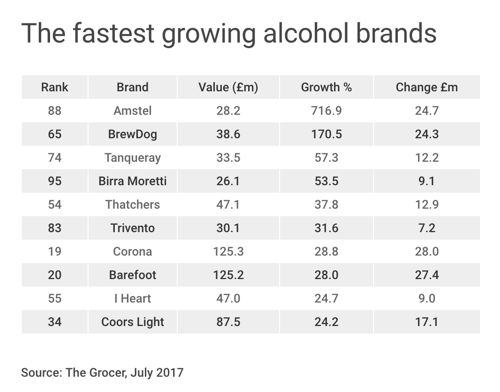 The ten fastest growing brands saw spectacular growth. Amstel broke into the top 10 as did craft brewer BrewDog. The fad for gin has seen Tanqueray enter the top 100. Thatchers was the big winner in cider with almost 40% growth. Wine brands Barefoot, I Heart and Trivento also had a good year.

The picture isn’t all rosy

The majority of Britain’s biggest alcohol brands grew last year. However, for almost a third, the results were disappointing. 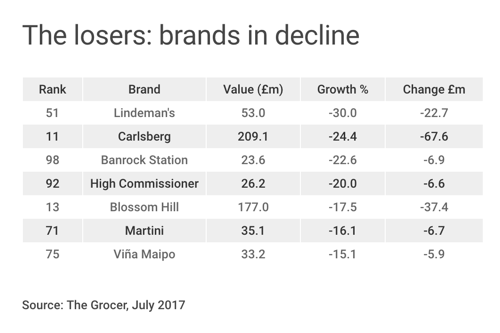 Lindeman’s is the biggest loser in this year’s list in percentage terms with Carlsberg losing the most value. It’s woes continue following its delisting from Tesco’s last year and the brand has lost £150 million in value since 2014. Will it’s new ads built on it’s Danish heritage stem the decline? Who knows though it’s likely that gains will only come at the expense of another big lager brand.

Wine bands Banrock Station and Viña Maipo all suffered too. Blossom Hill saw the biggest fall in the wine category. Are consumers falling out of love with the value wine brands? Or is the desire for higher margins pushing the supermarkets to favour more premium brands? It’s likely to be a bit of both. Innovations from Blossom Hill such as its Spritz can range may help stem the decline.

This year’s list of Britain’s biggest alcohol brands shows a mixed picture. Big names grew and big names declined. The threat of craft is there and this will only grow as supermarkets look to capture higher margins from listing premium brands. Despite this, only BrewDog has achieved the scale to punch into the top 100. Brands like Estrella, Hendrick’s, Maschio and premium wine brand, The Ned are hovering just outside the top 100. The next 12 months promise to further shake up the market for Britian’s top drinks brands. 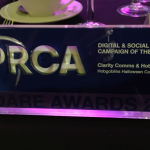 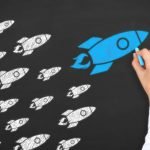 Influencer marketing: do you need a specialist agency or team?