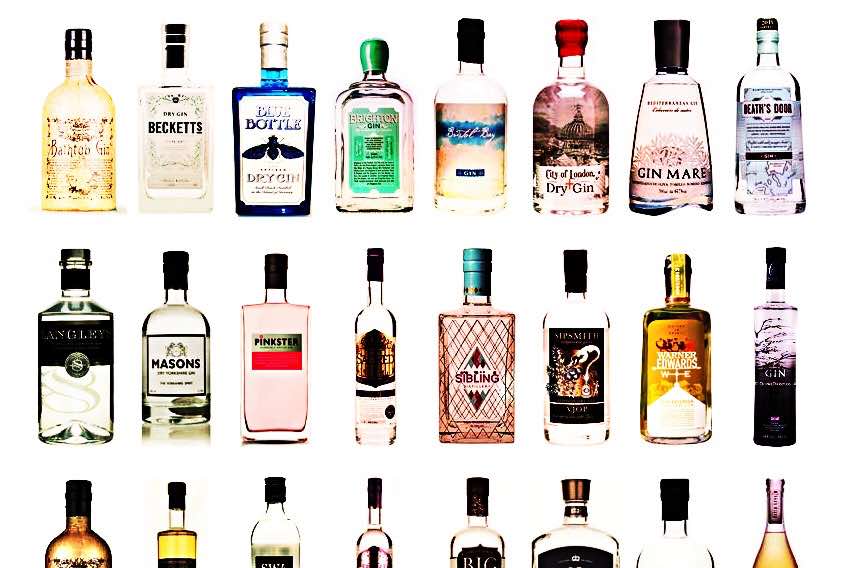 Everyone in the drinks sector knows that gin is hot. From innovative new brands to the Government talking up gin’s export potential, there’s plenty to celebrate. There’s no shortage of new craft and artisan gins. For many of these smaller players, using social media offers scope to build audiences and engage with drinkers, bartenders and retailers.

Social media has long been at the front of craft beer’s marketing playbook, but how well are their spirits colleagues utilising social channels? Are artisan distillers maximising their opportunities? We’ve looked at which brands are on social media, who their audiences are and which channels they’re playing in.

Craft gin and social media: Mixing up their channels

It’s no surprise that many craft gins and distillers are embracing social media to reach their target audiences, especially the highly sought-after millennial consumer. A cursory look found 30 craft gin brands visible on Facebook and Twitter. Instagram is also growing in popularity, with 17 of our list using the channel.

This isn’t an exhaustive list by any stretch, and though we’ve focused on UK craft gin distillers, overseas gin producers like America’s Aviation Gin and France’s G’Vine are also targeting consumers and trade through social channels.

Twitter is probably the main social media channel used by craft gin distillers. All 30 brands were active on Twitter, with many of them posting frequently.

Top of the list and the only brand with a following over 10,000 is South Western Distillery with 13,301 follows. Edinburgh Gin is second with just over 10K closely followed by Caorunn and Williams Gin with 9,084 and 9,021 followers respectively.

After this the size of the audiences falls significantly, with four brands (Blackwoods, The Lakes, Portobello Road and Cotswolds) all above 5,000. Beyond that the size of followings falls further still, with the remaining 12 brands’ Twitter followings hovering between 3,000 and 4,000.

Is Facebook losing its lustre for brands? You wouldn’t get that impression from a first glance at the top 20 craft spirit brands:

The top 5 brands all have very healthy followings, with Gilpin’s leading the pack at almost 41,000 likes. Edinburgh are second with almost 18,000 and three brands (South Western – producer of Tarquin’s Gin, Sipsmith and Caorunn) all have more than 11,000 likes. After this however, the numbers start to fall.

Adjusting for the massive Gilpin’s audience, the average is lower for Facebook than Twitter. From our review, brands seem to post much less frequently and engagement seems low too (though this isn’t a scientific review of engagement as we don’t have access to the page metrics).

A look at many of the brand’s websites showed that Instagram was well used. We found 17 of our 30 brands visible on the channel. The top 10 brands are: 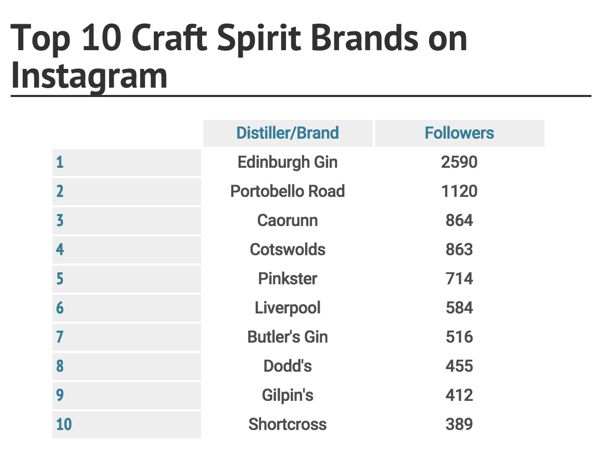 Whilst the audiences are much lower than Twitter or Facebook, brands seem to be much more active on Instagram than on Facebook. Edinburgh Gin has 2,590 followers and has posted on 235 occasions. Portobello Road Gin has acquitted over 1,100 followers from 115 posts.

But there isn’t a direct correlation between post volume and audience. Caorunn and Cotswolds have an almost identical Instagram audience yet the latter brand has added 100 more posts than Caorunn.

There’s no doubt that craft gin and social media mix (are the perfect blend…?!). Many are young brands with a grasp of the potential that social media offers. It lets them reach, engage and converse with drinkers AND trade customers. This savviness extends into clever use of digital such as Southwestern’s Taste with Tarquin campaign that lets you taste the gin with the distiller. Equally interesting is the growing use of Instagram.

It’s not just cocktail pictures though: many are telling their brand story visually though Instagram. They’re featuring the botanicals used, the distilling process, the packaging and, of course, recipe ideas.

Craft distillers are showing that they’re as switched on to social as craft beer. They’re also showing that they can adjust their activity in line with changing consumer behaviour and especially that of the young, tech-savvy millennial audience. 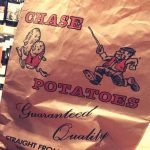 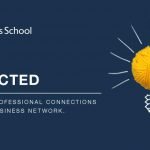