Soup brands & social media: is there value in social?

Soup brands & social media: is there value in social?

It’s that time of year again. A combination of post-Christmas health kicks, the cold weather or a runny nose means many consumers will be reaching for a comforting bowl of soup. Are soup brands using social media as a marketing channel? And does it add value to the category’s key players? Here’s our review of soup brands & social media.

The latest category report shows that soup brands face some challenges. Canned and instant soups are in decline and chilled in growth (£). The Grocer pins the decline on the warm winter and the relentless pressure on prices as the big four compete with Aldi and Lidl. Coupled with this is a lack of innovation and an ageing demographic. Younger consumers, the report suggests, are looking for provenance, variety, flavour and nutrition. These factors are cited for the the growth of chilled soups.

So how does financial performance relate to brand marketing? And how effectively is social media working to help brands? We’ve looked at the named brands from the Grocer’s category report to see who is using social, how effectively and whether effectiveness is linked to a brand’s size. In essence we want to know if new or established brands are making better use of social.

Which brands are using social?

The first step was to check to see which brands are using social media. The table below shows this alongside the brand’s retail performance data from the Grocer’s category report. 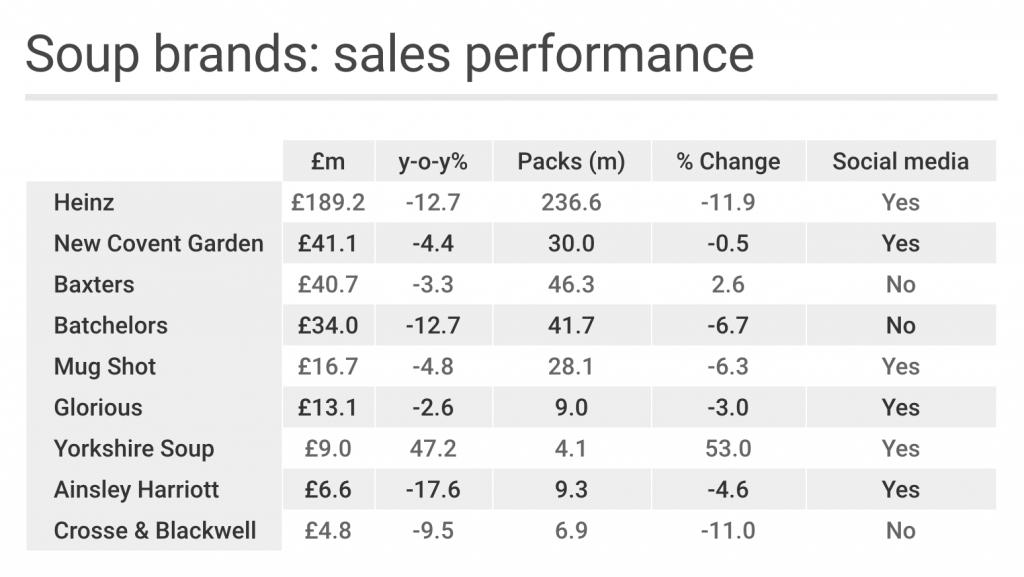 It’s a mixed bag. The two biggest brands are using social. Two of the oldest brands Baxters and Batchelors aren’t (Batchelors last Facebook post was in 2014). New kids on the block Glorious and Yorkshire Provender have a presence across Facebook, Twitter and Instagram. Dried brand Mug Shot and Ainsley Harriott are also using social.

Which brands have cracked brand engagement?

So who is using social well? We’ve tracked five brands and looked at their last 15 Facebook posts to determine their audience engagement. We’ve avoided Twitter largely because there’s a lot of repetition between Facebook and Twitter channels (same posts or similar with addition of hashtags for Twitter).

The table above shows the total engagements from each brand’s last 15 Facebook posts. We’ve attempted to calculate a nominal engagement rate using the audience data (as we can’t see post reach). Based on this, Yorkshire Provender has the most effective page followed by Heinz. Heinz gets the highest absolute volume though it’s page is 15 times bigger than Mug Shots, and 20+ times bigger than Glorious Soup. Conversely, Mug Shot gets a consistent but very low level of engagements.

Equally interesting is the types of content generating high engagement. Yorkshire Provender gets excellent responses from competitions. General product content such as new variants generate very low levels of engagement. Competitions present their own challenges though. They might drive high engagement but do they build brand affinity?

From the content we’ve looked at across Facebook and Twitter there’s little focus on campaigns. Instead feeds feel very tactical. Good use of competitions, some good conversations with consumers but little in the way of overarching strategies or content themes. There’s one exception though. Heinz…

Heinz are a well established brand. Despite declining volumes, they still significantly outsell most of their rivals. It’s here that their understanding of the brand comes into its own. The “Reasons to #LoveSoup” campaign drove superb engagement supported by great video content.

We don’t know if the engagement was organic or supported by ad spend. It probably doesn’t matter as it shows how they ran an eight week campaign that got great results. This is the opportunity for the smaller brands: to use social to build loyal, engaged audiences which in turn builds brand equity. Heinz might be lagging behind in innovation but it can still teach the new brands a thing or two.

It isn’t about budgets either. Brands only need to look outside the category to see how newer entrants are using social brilliantly to build loyal, engaged audiences. 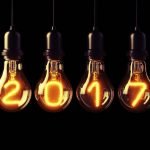 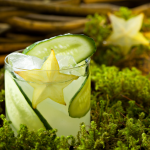